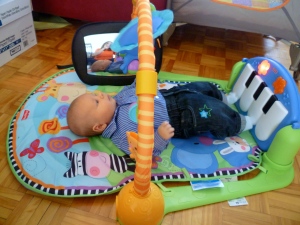 My kiddo LOVES this thing!

Santa delivered this to him on Christmas day and my son has been playing with it daily ever since we first assembled it on December 26th.  He has been playing with it daily since first discovering that he could create music by kicking his legs out and he can stay completely enthralled by the music he’s creating for nearly an hour before getting tired and needing a break.

Why I love this product so much?

For starters, it can be used from a very young age (my son was just over a month old when he first used it and had recently discovered that his legs were attached to his body).  Plus, it can grow with your child as it is a 3 in 1 toy.  The first stage – the one we use – allows the baby to be on his/her back to play.  Then, it can be transformed so that your kid can play whilst lying on his/her tummy.  Finally, once your little tyke can sit up, the toy can transform again so that the piano can now be played with hands rather than with feet.  An added plus?  It’s really easy to assemble!

Of course, I can’t ignore the fact that this is a great educational toy.  It aids in the development of gross motor skills and serves as an introduction to the world of cause and effect.  It is also a great sensory toy as it stimulates hearing, touch (feet on the piano keys and hands accidentally hitting the overhead toys) and sight (overhead mirror and lights lighting up when the music plays).  Speaking of the mirror, ours is angled so that our son sees his legs moving about, hitting the keys and making the lights turn on.  From the pictures of the product, I thought that the mirror would be parallel to the mat, thus allowing the baby to see him/herself.  However, I do frequently tilt the mirror so my son can see his face.  The results are instantaneous: he stops moving his legs and looks up at the “other baby” looking down on him with sheer astonishment.  Makes me laugh every time!

Of course, I can’t not talk about the music.  In all, there are eight melodies on two settings.  One setting allows for the actual individual notes on the keyboard to be played and if no keys are pressed within a few seconds one of four melodies will start to play.  On the other mode, the individual notes cannot be heard and the other four tunes play non stop for about a quarter hour.  The tunes are varied and quite pleasant as is the volume.  There are two volume settings and the loudest setting is no where near annoyingly loud.  The product requires 3 AA batteries which are included.