A big THANK YOU to Aurora at http://metalangel.wordpress.com for thinking of me! 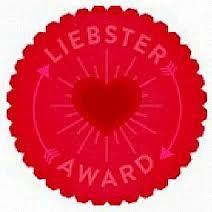 Imagine my surprise when I awoke this morning to see that I had been nominated for this award.  I had seen, on other blogs, nominations of the sort, but I never thought that I would one day receive one, especially not after only three short months of blogging.

Ok cool!  But, what exactly is a Liebster Award?

Well, It is given to up and coming bloggers that have less than 200 followers.  It is a “pat on the back” of sorts to encourage those bloggers to keep up the good work.  Nominations are given by fellow bloggers.

Of course, no award nomination would be complete without its own set of rules.  I mean, can you imagine the Grammys without any sort of structure to select the winners?

So, what are the rules for the Liebster Award?  Well, first I have to publicly thank the person who nominated me.  Check.  Then, I have to share 11 things about myself.  Thirdly, I must answer the 11 questions that were asked of me and then write up 11 questions of my own that – you guessed it – the 11 bloggers that I will nominate will have to answer!

Whew!  Sounds like a lot of work!  But, that’s fine, I’m soooo up to the challenge!

Oh!  Almost forgot.  I also have to include a copy of the award button on my blog.

Mommytrainingwheels in an 11 point nutshell!

1.  I’m a proud Franco-Albertain.  Born from francophone parents in an English province.  The best of both worlds!

2.  I am the eldest of three children.  The youngest is ten years younger than I am.

3.  Apparently, I am pretty talented when it comes to making desserts.

4.  I am a major bookworm.  I actually ended up buying a kindle because we were running out of place to put all my books.

7.  We have three pets at home: a leopard gecko, a sunglow gecko and a brown anolis.

9.  I can probably count on my fingers and toes the number of times I’ve ever worn any make-up.

10.  At home, we have elected to not have tv or a microwave oven and have only very recently (ie: a couple of weeks before the baby arrived) invested in a cell phone.

11.  I would love to have four children.  But shhhh, don’t tell my boyfriend!

My answers to the questions I was asked.

1. Who is one person living or dead you would love to meet the most and why?

I would really love to meet Jean-Pierre Rampal.  The man was an AMAZING flautist and I am certain I could learn quite a bit from him.

2. What is one talent you don’t have you have always wished you’d been given?

Drawing!  I’m very artistic, but suck badly at drawing.  I mean, seriously, a three year old can draw better stick figures than I can.

3. Do you have any phobias?

Oh yes.  I am frightened of amusement park rides.  However, it would seem that this doesn’t fall under the category of a phobia because it doesn’t affect my day-to-day life.

4. What was your favorite book when you were a kid?

6: What is your favorite animal and why?

7. You are offered two front row tickets to the concert of your choice, who would you want to see most?

Elton John; the man has so much energy and talent.

8. You have last minute company coming over for dinner, what would you serve?

Probably pasta.  We always have spaghetti sauce on hand and pasta noodles are easy enough to make if I don’t have any in the pantry.

9. What’s the strangest thing you have ever bought for your son or daughter?

My son is only three months old so I haven’t purchased anything very strange yet.  Though, arguably, one could say that the green emery board with sparkles is pretty strange.

10: What song would you play loudly out the windows of the car to embarrass your kids when picking them up from school?

Hum, well, that would depend on their age.  Assuming they are preteens or older, and keeping in mind that I live in a French environment, it would probably be “Je suis malade” by Serge Lama; that song traumatized me when I was younger.

11: Which Hollywood celebrity would you most like to see given a one way trip to the planet Mars?

I honestly don’t know enough about Hollywood celebrities to answer this question.  But it would have to be someone who, on top of being a bad actor, was also an egotistical jerk.

Ok my turn!  11 questions to my nominees.

1.  What is one childhood object that you wish you still had?

3.  If you had Bill Gates’ bank account, what would you do with the money?

5.  If you could travel through time, when would you like to go and why?

6.  What is one thing you can’t live without?

7.  Who is your favorite superhero and why?

8.  What is your favorite sport to watch or play?

9.  Are you a morning lark or night owl?

10.  If you could live anywhere in the world where would it be?

And the winners are… My 11 nominees.

11 thoughts on “Nomination for the Liebster Award!”