For the past three weeks, I have seen my son flourish.  Daycare is really awesome right now.  Besides the fact that he loves it and is almost always in a good mood these days, he has also started picking up some new stuff.  Though I don’t know if all of the new things that he is trying out are caused by him being around other (older) children or if he was just developmentally ready to try out new things, it is fun to see how quickly he has evolved.

The first thing I noticed was his babbling.  Before, he would sometimes emit a squeal of pleasure, or “hum” a bit if I sang to him.  Now and again, he would start chattering with a toy, but as soon as I talked to him or tried to initiate a “conversation” he would stop.  These days though, he chats up a storm pretty much all the time.  When I drive him to daycare, I always know whether he’s awake or sleeping because as long as he’s awake, he babbles.  He also joins in conversations and expresses his opinions loudly during meals.

Little Dude has also become quite the little explorer.  He has a fascination with zippers.  Seriously, he is OBSESSED with them.  He also likes to open and close things, namely drawers and cabinet doors.  Today, he spent a good 45 minutes in the kitchen just opening and closing doors, pulling up, sitting back down and playing with the “toys” hidden behind the cabinet doors.  Of course, this activity came with multiple squeals of pleasure on his part. 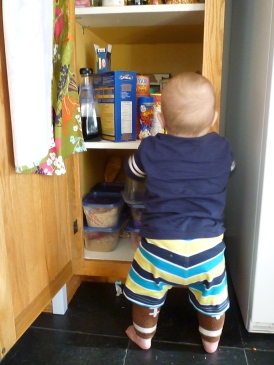 Speaking of pulling up, he has also started cruising.  A part of me is eager to see his start walking around, but another part of me just isn’t ready yet.  He is adept at going up stairs (when he decides that he feels like going up on his own, that is).  He’s working on his fine motor skills too and is using something that resembles a pincer grip frequently now.  Charles has also taken to exploring little holes with his fingers and random objects (which is why I am sooo happy that we have outlet covers everywhere) and has discovered a new activity in the bathtub: removing the plug and trying to put it back in so that he can take it out again.  He does this until there is no more water left and then pulls out to be taken out of the tub.

The little man loves the park -especially the swings – and is not afraid to play in the grass or in the sand.  So far, he had tried to sample a couple of blades of grass (and decided he did not really like the taste), but he had never thought of bringing some sand to his mouth.  Of course, it was just a question of time before it happened though.  Today, when we went to the park, there were some other children there.  A little girl – a 14 month old – walked up to him eventually.  She shoveled some sand in front of him and then brought the sand-filled shovel close to his mouth (which, for the record, he opened wide *sigh*).  Both myself and the little girl’s mom intervened in time but the experience gave him an idea.  About five minutes later, my son decided to grab a handful of sand and bring it to his mouth.  I decided to not stop him because I figured that he would try and try until he got to sample the sand.  I also figured that he would put sand in his mouth once, grimace, maybe whine/cry a bit and not do it again.  Well, he brought the sand to his mouth and then…put his hand in the sand again to shove another handful in.  What gives?  The kid likes sand it would seem.  (For the record, I did not let him put a third handful in his mouth and was able to distract him into doing something else afterwards).