I am by no means an expert in photography.  I don’t have any training.  I don’t even like to have my picture taken.  In fact, I’ve only recently decided that there were more important things in life than avoiding a camera at all costs and now tolerate my picture taken…as long as it is not posed (ie: I don’t know I’m being photographed) and am told that I might end up on some photos (ie: I know I will be photographed) if that makes any sense.

I DO however LOVE to take snapshots of my son.  I mean, other things are nice to photograph as well, but my son is just the cutest thing on Earth (right?  RIGHT?) so  HAVE to take pictures of him…on an hourly basis.

I HAVE learned a few tricks over the past few months though and thought I would share with you what works for me.

1. Do not wait for the perfect shot.

It won’t happen.  Or, when it does, you may not catch it especially when your are attempting to take a perfect shot of a baby.

The great thing about the digital age is that you can take hundreds of pictures in a small time frame (my boyfriend took about 900 during our last outing at the park with the little man) and delete the ones that don’t work for you.  When I am looking for a certain pose, I just set my camera on “hi-speed burst” and keep my finger down on the shutter button until I am done.  It is also a great function for my boyfriend who has trouble taking non-blurry pictures.

The “hi-speed burst” method is the one I used when I was taking the pictures that I would use to decorate my bedroom with and when I was aiming for a certain pose to tweet to the football team I root for.

Though perfectly-centered shots are nice, they get boring if that’s all you have.  Though I have a tendency to forget this tip myself, I find that when I break from my usual framing of pictures, I end up with some very interesting results.  The following two photos are among my favourite out of all of the pictures I have of my son. 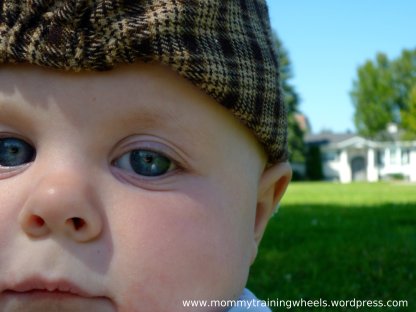 3.  Use natural lighting to your advantage

I personally prefer shooting without a flash.  I prefer the look of natural lighting in a photograph.  The only time I use a flash is when it is absolutely necessary.  For instance the flash is needed when I snap a picture of my son in one of his weird sleeping positions.

4.  Don’t be afraid to use photo editing software

I’m not just talking about removing the red eyes or going to great lengths to modify a photograph to the point where the subject doesn’t even remotely resemble his/herself.  Some modification can be cool though.

I have recently found a free online editing software called Pixlr.  It has three different versions.  The first, Pixlr-o-matic, will allow you to pick from some preselected color effects, frames and overlays.  The second version, Pixlr Express, will allow for collages, an even greater pick of effects, frames and overlays as well as give you the freedom to add text, stamps and do basic editing.  The most advanced version, Pixlr editor, allows you a LOT of freedom.  I found that it resembles Photoshop a lot (not that I’ve used Photoshop much) and can allow for much personalized tweaking and fun.  For instance, you can do selective black and white with the use of layers.  This is what I used to modify the pictures that I eventually had printed on canvas to decorate our room.

5.  Don’t put your finger in front of the lens!

Just kidding!  Though, it is a good idea to avoid doing so 😛

Here are a few other things I did with the various versions of Pixlr.

Does anyone else have awesome tips to help a noob photographer like myself?

I’ve decided that I’d start a new theme on my blog: Friday photo recap (kind of like Wordless Wednesday but mommytrainingwheel style :D).  I’ll be putting up pictures of things we did over the week with Little Dude.  The thing is, there are always so many things I want to write about but don’t necessarily have the time to.  Often, when I get around to writing about one particular event, others have surfaced and so, the one I was planning on writing about kind of ends up on the back burner.  So, without further ado, here are a few of last week’s moments!

It’s been over three months now (I think) since I received this award from Valerie, the great blogger at Atlanta Mom of Three.  It’s about time I take the time to accept it!  Thank you Valerie!

As always, accepting a blogging award comes with rules.  Here they are:

2.  Acknowledge that blogger and link back to their blog.

4.  Nominate a “Baker’s Dozen” (award 13 blogs), link to their blogs in your post, and notify them on their blogs. It’s ok if you don’t have 13 blogs to nominate, just share the love!

5  Copy and paste the award on your blog somewhere.

Cake.  Definitely cake.  Yummy cheesecake…mmm, I have a sudden urge to make some right now.

If I really have to choose between the two, it would be vanilla.  But I’m more of a fruity kind of gal.

What is your favorite sweet treat?

Crème brûlée cheesecake!  Or maybe key lime pie?  I don’t know, there are too many to choose from!

When do you crave sweet things the most?

When I’m stressed out.

If you had a sweet nickname, what would it be?

A Nugget Of Joy For A Lifetime Of Cupcakes

Let it come from your heart

Thanks for keeping such awesome blogs!